Matthew may be a Category 4 or 5 hurricane before striking the Florida coast starting Thursday night.

This will be the strongest Florida east coast strike since Hurricane Andrew.

Matthew will then meander off the Southeast coast well into next week.

Hurricane Matthew, once again a Category 4 hurricane hammering the northwest Bahamas, is hours away from beginning a potentially catastrophic, rare Category 4, perhaps even Category 5 siege on Florida’s east coast, with dangerous storm surge, destructive winds and flooding rainfall stretching into Georgia and South Carolina by the weekend.

(MORE: WATCH OUR CONTINUOUS LIVE COVERAGE ON THE WEATHER CHANNEL)

The eyewall may deliver the strongest, most destructive winds anyone in parts of the northeast and east-central Florida coast has seen in their lifetime. The last, and only, Category 4 hurricane to make landfall anywhere in northeast Florida or the Georgia coast was an 1898 hurricane south of St. Simons Island, Georgia.

According to the National Weather Service in Jacksonville, Florida, “Some of the lowest barrier islands will be completely overtopped with large battering waves and life-threatening flooding. Barrier islands are likely to be breached and it is extremely possible that new inlets will be cut off in the worst affected areas.”

This will be a much greater storm surge than the New Jersey shore saw during Superstorm Sandy in Oct. 2012, the National Weather Service in Jacksonville, Florida, says.

The National Weather Service in Melbourne, Florida, also pulled no punches regarding the potential impact, saying Matthew would likely be stronger than any hurricane in recent decades, including the 2004 hurricanes (Charley, Frances, Jeanne) as well as Hurricane David in 1979.

The severe impacts from this hurricane could lead to some locations being uninhabitable for weeks or months, the National Weather Service says.

A hurricane warning remains in effect along the entire east coast of Florida, as well as the northwest Bahamas.

A tropical storm warning has been issued from north of South Santee River, South Carolina, to Surf City, North Carolina.

All preparations in the eastern Florida peninsula, coastal Georgia and southern South Carolina should be rushed to completion.

Satellite and radar imagery show the eye of Matthew making steady progress toward the Florida coast. The northwest Bahamas are still being battered by Matthew, as well.

Some outer rainbands have been pivoting into Florida over the past several hours, with some stronger gusts embedded in those bands. Conditions will quickly deteriorate through Thursday evening. In the 7 p.m. hour, winds gusted to 55 mph with sustained tropical storm force winds at Lake Worth Pier in eastern Florida.

Here is the approximate timing of the worst wind and surge impacts, coinciding with the nearest passage of the eyewall of Matthew. (Note that Matthew’s eye may never make landfall, but its eyewall, containing the hurricane’s strongest winds, may do so.)

(MORE: Facts/Myths About the Hurricane Cones of Uncertainty)

Small, subtle changes in the path of the eyewall, sometimes not resolvable until hours before the passage, will make a large difference on wind impact.

(MORE: When Hurricanes Parallel the Coast Instead of Making Landfall)

Major, damaging storm surge flooding is expected as Matthew curls its way northward along the Southeast coast. If you live along the immediate coast and are told to evacuate, please do so.

Here is how high the water could reach during this life-threatening inundation if the peak surge coincides with high tide, according to the National Hurricane Center:

The 7- to 11-foot above ground level forecast storm surge from Sebastian Inlet, Florida, to the Edisto Beach, South Carolina, is comparable, or even higher in spots, than what New Jersey and New York experienced during Superstorm Sandy in Oct. 2012. The highest surge values there were 4 to 9 feet above ground level.

Here are times of high and low tides for several locations that could see significant storm surge inundation. Keep in mind the NHC surge forecasts are “worst-case scenarios” if they occur at high tide.

Matthew will also continue to generate large, battering waves along the entire coastline of the Southeast through this weekend. Mariners should stay out of the water given this danger.

Of course, major beach erosion is a given with all those factors above playing out.

Forecast wind gusts for Matthew. These are subject to change depending on Matthew’s exact path.

Matthew’s eyewall will likely rake a sizable swath of Florida’s east coast, as at least Category 4 intensity, and is probable to pass near enough to the coasts of Georgia and South Carolina to bring hurricane conditions to those areas as well.
These may be the strongest, most destructive winds experienced along parts of the Florida east coast in decades, and may be of a magnitude not seen by many residents along the east-central and northeast Florida and Georgia coasts.

Hurricane-force winds (sustained 74-plus mph) are likely along Florida’s east coast starting Thursday night, and potentially north of there in coastal parts of Georgia and the Carolinas Friday into Saturday.

Structural wind damage is expected along with downed trees and widespread power outages in areas where hurricane-force winds occur. Matthew is forecast to be a major hurricane (Category 3 or stronger) when it moves near Florida’s east coast, so extreme wind damage from winds over 100 mph is very possible.

The National Weather Service said in a local statement that widespread extensive to devastating wind impacts will be felt along the coast. Power outages could last for many days.

Should the center of Matthew ride right along the coast of Florida, hurricane-force winds could occur as far inland as Lake Okeechobee and the Orlando area in Florida. Widespread power outages could occur in those areas, as well.

(MORE: Impact Differences When a Hurricane Parallels the Coast Instead of Making Landfall)

The potential for tropical storm-force winds (39-plus mph) will encompass a larger part of Florida as well as southeast Georgia and the coastal Carolinas. These winds could expand all the way to the Gulf of Mexico.

How strong those winds are in any one location will depend on where the center of Matthew tracks in relation to the Southeast coast.

Even tropical storm-force winds could down trees and knock out power.

Two other threats from Matthew are the potential for rainfall flooding and tornadoes.

The heaviest rainfall totals, possibly ranging between 5-12 inches, are likely to be confined to the immediate coast, from Florida to eastern North Carolina. There is a potential for even heavier rainfall if Matthew makes landfall.

An isolated tornado threat could also develop on the Southeast coast, as Matthew’s center draws close.

You may have noticed the forecast track has changed radically for areas from North Carolina northward.

Matthew will not get “picked up” by a southward dip in the jet stream forecast to push into the Northeast U.S. this weekend.

Instead, Matthew is expected to curl southeast, then south away from the coastal Carolinas beginning later Sunday.

Matthew is then expected to meander off the Southeast coast or north of the northwest Bahamas into next week, but details on where it may eventually go, including, perhaps a second strike as a weaker system in the Bahamas or Florida, are uncertain at this time.

(MORE: Matthew May Look Back Toward Florida, Bahamas for Second Hit)

Conditions will remain dangerous in the northwestern Bahamas, including Freeport, through Friday morning. Settlement Point in the Bahamas recently reported a sustained wind of 75 mph with a gust to 98 mph.

Early Thursday evening, Freeport in the northwest Bahamas reported sustained winds of 100 mph with gusts up to 121 mphas the northern eyewall lashed the area.

Remarkable observation tonight from GGT Airport as #Matthewrakes the Bahamas

The worst wind and surge impacts, coinciding with the nearest passage of the eyewall of Matthew, will affect the northwest Bahamas through Friday morning.

A storm surge of 10 to 15 feet, compounded by up to 15 inches of rainfall from Matthew will lead to life-threatening water rises in the Bahamas. Battering waves riding atop the surge will only compound the damage potential.

This is on the order of storm surge witnessed during Hurricane Joaquin almost exactly one year ago, only this time, it may occur over the entire island chain, rather than just the central and southeast Bahamas.

All interests along the Southeast U.S. coast should be rushing preparations to completion.

Check back with us frequently at weather.com for any important forecast updates.

George F.L. Charles Airport on St. Lucia picked up 9.21 inches of rain Wednesday. On the south side of the island, Hewanorra Int’l Airport picked up 13.19 inches of rain in just 12 hours from 8 p.m. Wednesday through 8 a.m. Thursday, according to the Antigua Met Service.

Flooding during Tropical Storm Matthew in St. Luciahttps://youtu.be/caZ0dkAFJ7s  via @YouTube

A wind gust to 89 mph was reported in St. Pierre, Martinique, Wednesday evening. Some stations are elevated at 50 to 100 feet. Sustained winds of 39 mph were reported on the island of Barbados.

(MORE: Category 5 Hurricanes Prior to Matthew)

According to Colorado State University tropical scientist Dr. Phil Klotzbach, Matthew became the lowest latitude Category 5 hurricane in the Atlantic on record (beating the old record set by Ivan in 2004).

Some outer rainbands triggered flash flooding in Jamaica Sunday, hundreds of miles away from the center of Matthew. 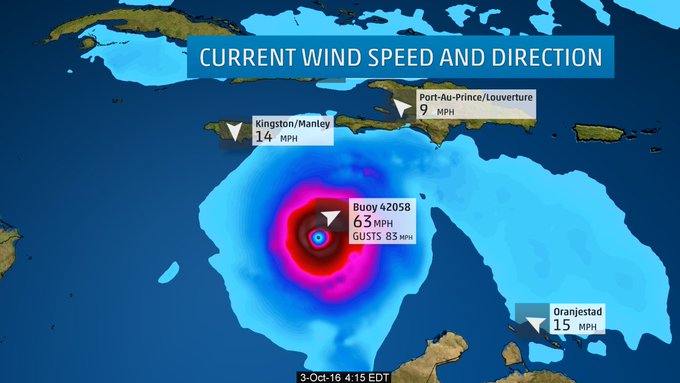 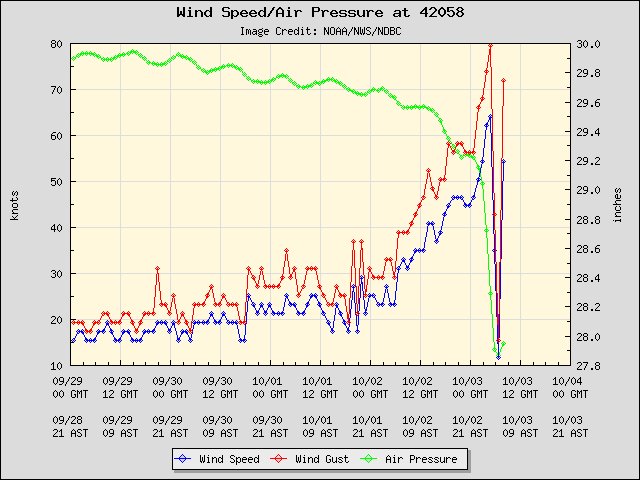 Hurricane Matthew’s eye first came ashore in the Greater Antilles in the western Tiburon Peninsula of Haiti near the town of Les Anglais around 7 a.m. EDT Tuesday morning, according to the National Hurricane Center.

#Matthew made landfall near Les Anglais, Haiti at 7 am EDT. This is the first Category 4 #hurricane landfall in Haiti since Cleo in 1964.

Matthew was the first Category 4 Haiti landfall since Hurricane Cleo in 1964, and only the fourth such intensity or stronger hurricane to track within 65 nautical miles of southern Haiti’s Tiburon Peninsula since the 1960s, according to NOAA’s Best Tracks Database.

Hurricane Matthew made a second landfall near Juaco, Cuba, around 8 p.m. EDT Tuesday evening. October 4. An unconfirmed wind gusts to 155 mph was reported in the town of Baracoa, Cuba, in Matthew’s eyewall.

Radar from Guantanamo Bay Wednesday morning indicated Matthew’s eyewall had a sizable hole in its western side after passing over Cuba Tuesday night.

Rod Smith (right), hugs his wife Karen as they watch the churning surf on October 6, 2016 on Satellite Beach, Florida. Hurricane Matthew is expected to reach the area later this afternoon. (Mark Wilson/Getty Images)

The 15 Most Iconic Hurricane Images of All Time

These are the photos and images of tropical cyclones that are most burned into our minds.

Is a Category 6 Hurricane Possible?

Have we already had Category 6 hurricanes in the past? Do we have any in our future?